"Not only famous for the market, shopping paradise at the border gate, Lang Son province also attracts tourists by historical relics, stories in legend and beautiful nature. Lang Son Province is one of the best places to visit Hanoi in every way." 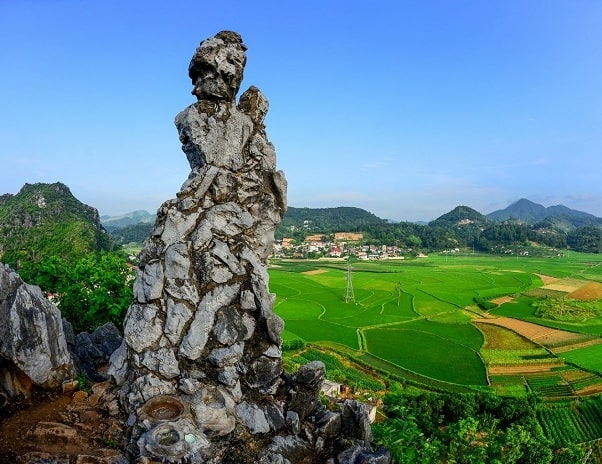 The Statue of Vong Phu

Above the city of Lang Son - sticks out a rock in the shape of a woman, holding a child on her back: her name is Vong Phu. She is also known as "Lady To". The mountain is also called the To Thi Mountain. According to legend, this woman was waiting for her lover, who went to war. She waited and waited until she petrified.
This mountain is called "Thi Mountain" and is part of the Tam Thanh Ward mountain cluster, on the northwestern edge of Lang Son City. It is a must visit To Thi Mountain if you ever have the chance to travel to Lang Son City.

A boy once lived in the highlands of North Vietnam who had lost both his mother and father. He lived with his little sister in a small house on the slopes of a hill.

Every day he went to the forest early in the morning, not far from his house to chop wood. He marketed the wood to sell for food and provisions. He devoted the rest of the day to his little sister, whom he loved and cared for lovingly. The brother and sister were very happy in their house until one day a stranger arrived. It was an old man who came to the cottage one night and asked for shelter.
When the brother heard that the stranger was a prophet, he eagerly asked his guest to predict the future. The old man pointed to his book and said to the boy, "The date and time of your birth indicate that you will ever marry your own sister.
The old man continued, “It is irrevocable. No one can act against his fate. ” The boy considered the old man's words nonsense and stopped thinking about it.

One fine day, the young man took his sister to the forest. There the girl watched and listened to the birds, while her brother chopped wood.
Suddenly the edge of the ax fell on the girl's back. The little girl fell down. Her body was bloody. The young man thought that his sister had died. He was very afraid of his crime, so he ran away from the forest.
He did not want to return to his home and wandered far into the highlands. He changed his name and settled in a place far from his home. He was very unhappy and saddened by the terrible thing he had done to the sister, which he had always loved.
However, he gradually forgot about hard work and finally began to build a new life for himself.

Fifteen years later, he became the proud husband of the daughter of a very wealthy merchant. A beautiful child was born, and that completed the happiness of the devoted couple.
When he entered the backyard one day, he noticed that his wife was drying her hair in the sun. She had taken off her outerwear and when she threw her hair forward to comb it, he saw a deep ugly scar on her back for the first time. He approached his wife and asked what caused it.
The woman said in a tearful voice, "I am not the real daughter of the man you know as my father. Originally, I came from a faraway place, where I lived in a small house with my older brother. He was very kind to me and I loved him very much. "
"But one day, fifteen years ago, I went into the woods with my brother to chop wood. He was injured by his ax. Because he thought I was dead, he ran away. ”
"I was rescued by a trader who had just lost his daughter. He felt sorry for me and adopted me. I have never seen my brother again and I will never know why he left me. We loved each other very much. ”
The woman's eyes were filled with tears. The man struggled to control his emotions and inquired about her own father's name and that of her native village.
There was no doubt about it. The girl he married was his own sister.
The shame and the painful feeling overwhelmed him. He assumed he had done a terrible deed. The next morning, he found a pretext for leaving his home, promising to return within six months.

Time passed, six months passed, and yet the man did not return home badly. Every evening, at dusk, the frightened woman carried her child to the high peak of the mountain, facing the road, watching in vain for so many days, months, and years that one day she turned to stone. There, on the lonely mountain top, mother and child keep their eternal vigil. 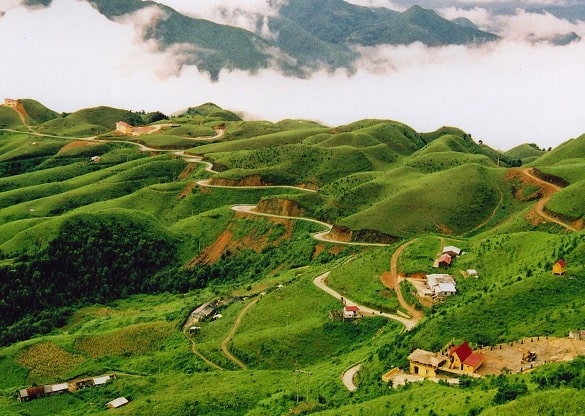 The highest point in Lang Son Province is Mau Son Mountain, which is about 1,500 feet above sea level. The winding road winds upwards, where you have a beautiful view from the top. This mountain pass is just as beautiful as the "Passage of Clouds" at Danang. Mau Son Mountain is located 20 miles from Long Son.
Lang Son has a tropical climate, although it can sometimes snow and it has four seasons. The average temperature is 21 degrees. The main town has a station and a good highway to Hanoi, which is 150 kilometers away from the city.