Sitting at the other end of the spectrum in the zodiac, the snake is the symbol of yin (female/ cool) energy. A wise sign that is enigmatic, the snake is full of unspoken mysteries. This sign is considered the most irresistible sign that can bewitch anyone in its presence. Snakes, although cool and collected on the surface, are intense and passionate in what they believe.
They rely on their own judgement and will not accept failure.
Snakes are said to be lucky with their finances and learn well from past mistakes. And although sympathetic to others, snakes are known to be miserly. They can be calculative and refuse to be coloured by the ideas and perceptions of others. They may be passionate but are also possessive and demand exclusivity. Snakes find power, wealth and fame irresistible and will plo to achieve their targets.

Health: Snakes prefer living a peaceful life, and they do not like a noisy environment. Snakes become easily stressed when their lives aren’t calm or in order. Therefore, a manageable workload would be good for them rather than a schedule of over workload. They need to spend lots of time to relax themselves. It's necessary to take vacation at a proper time. People should pay attention to the health of snake people, especially senior members in the family.

Career: Snakes are very creative and extremely diligent. Though snakes work very hard, they have a tendency to be job-hoppers for they will easily become bored. Snakes are great thinkers. Complex problems stimulate them. And of course they’re excellent problem-solvers and thrive under tight deadlines. Good career choices for Snakes include: scientist, analyst, investigator, painter, potter, jeweler, astrologer, magician, dietician, and sociologist.

The Vietnamese zodiac signs are determined by the lunar year in which you were born. The Vietnamese believe the animal ruling one's birth year has a profound influence on personality, and destiny.
The saying is: "This animal hides in your heart." 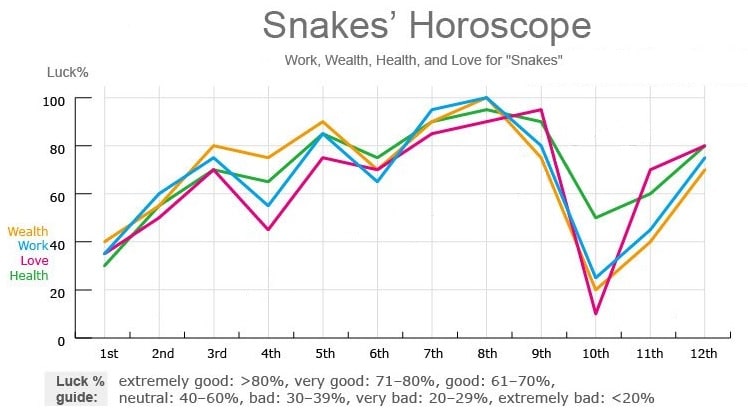