"We saw this as part of our cruise activities. Based on the information provided by our ship director Mr. Linh, we were all well prepared for the number of steps and what to expect physically. Once we were there, we were amazed at the beauty and history behind them. This was a really GREAT experience and Mr. Linh added so much as he guided us through the incredible sights and shared many stories. We would definitely recommend this for anyone with the ability to climb lots of stairs. The pay-off and experience is well worth the effort."

Ha Long Bay - has many limestone islands with caves. Virgin Cave is one of them. This is on Bo Hon islands, close to some other famous caves in Halong Bay. Virgin Cave (Hang Trinh Nu) is seen as a symbol of eternal love of couples by the people of the fishing villages.
When you step inside the Virgin cave, you'll see a statue of a petrified girl with long hair that desperately stares into the distance of the ocean. Not far away is the Man Cave (Hang Trong and Hang Trai Con), where a petrified man yells in the direction of the Virgin Cave.

One night a violent storm broke loose. The wind was terrible and the girl fossilized in the grotto. That same night her fiancé heard the news that she was banished to an uninhabited island. He decided immediately to go and look for her, but he ended up in the same storm. His boat was hit to pieces and flushed on a desert island. In a flash he saw his lover. He screamed her name, but to no avail and in despair he petrified also. That was in the Man Cave. 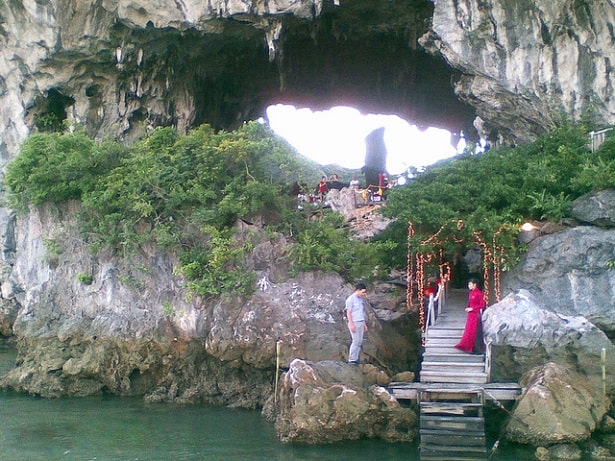 Some fishermen tell a different story about a loving couple, who was unable to marry because they were so poor. The man was determined and wanted to make a big catch at sea, so he had money to get married. For days the girl heard nothing from him and decided to look for him at the sea. In this enormous sea with its numerous scattered islands, they could not find each other. Exhausted girl was sheltering in a cave overlooking the ocean and she called desperate name over the sea. Then she froze..
The fiance also washed ashore on a nearby island and exhausted he petrified in a cave. This is called the Man Cave.

The locals said that they every time, when someone passes the cave you can hear the screams of the echoing voices of the loving couple. Believe it or not, you'll find the Virgin Cave an intriguing cave on your trip in Halong Bay. 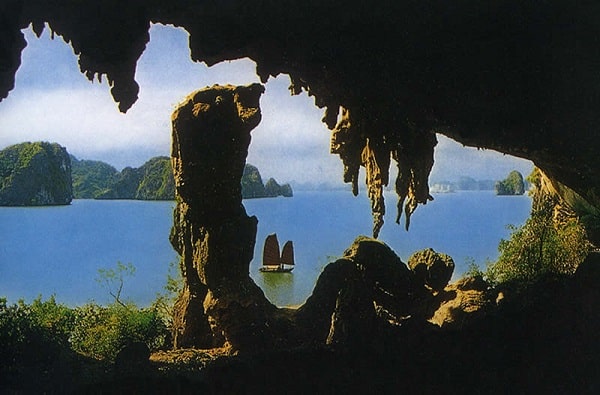 View from the cave

"I've visited several caves around Asia and this is one of the better ones. It's a big cave to explore, so you won't feel claustrophobic. It's well lit, both natural and artificial, so you won't be stumbling. It's a little tight in some areas, so it might be hard for some people to get thru some of the smaller openings. "