"The trail starts out paved and level, above the ground - not quite a canopy walk, but you can get great views of the ancient trees and giant palms, butterflies and lots of orchids. Once you get to the end of the paved trail, you need to climb steep steps to reach the entrance. It is not a long trek. It had recently rained when we went, so the rocks were slippery, but it was still quite doable." 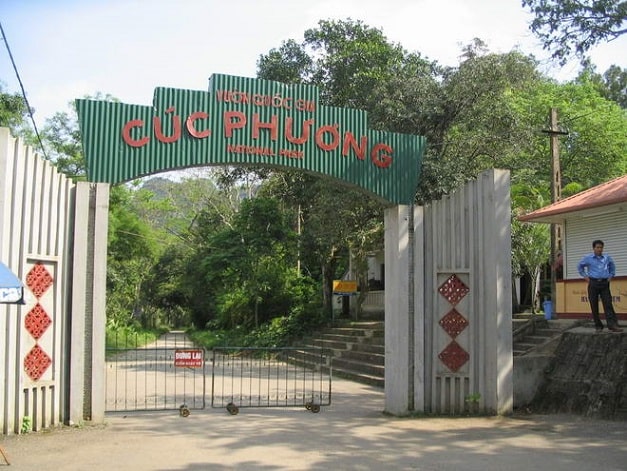 Cuc Phuong National Park - is the oldest national park in Vietnam. It was founded in 1962. It is a well-preserved rainforest with an endangered animal shelter for monkeys and turtles. The monkeys are sometimes confiscated if they are likely to be illegally traded, others are abandoned by their mother. There are sometimes rare monkeys at such Delacour's langour monkeys. Turtles are collected, otherwise they disappear into the soup, for turtle soup is considered a delicacy. The animal shelter is at the entrance of the park and you can not miss. Here are some restaurants, lodges and a Visitor Information Centre, where you can hire a guide.
At the entrance starts also the trail, which takes about 6 to 7 kilometers. The path goes through the rainforest, along lianas and a 1000 year old tree, the "Big Tree". The average height of the trees is here 50-80 meters. If you want to see wild animals, you have to make a night walk. 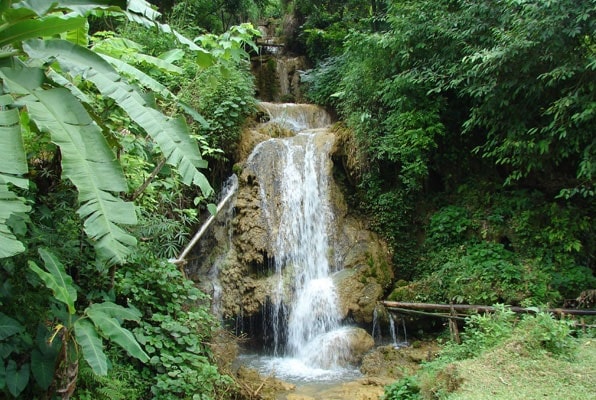 Waterfall in the park

The flora and fauna is impressive. There live many animals in the park, including the spotted leopard, Delacour's langhurs, slow loris, civets and black bear (or honey bear or sun bear). Rare plants, including various species of orchids, but there are 336 documented species of birds. Visitors in April and May have the opportunity to see literally thousands of vibrant butterflies.
In the caves of the Cuc Phuong Park are still visible valuable remains of the people who lived here thousands of years ago. You can see, inter alia, rock paintings and fossilized marine reptile, suspected that lived 200-230 million years ago.
There are remains of prehistoric humans found that 7,500 years ago lived in the caves of the many mountains. In earlier times, Cuc Phuong was home to the Muong hill tribe. The Muong live until today in scattered villages on the edge of the park. When you visit these communities, you can still see their traditional stilt houses, waterwheels, bamboo rafts, and weaving brocade for.

Good walking shoes are recommended, as it can sometimes be slippery by rain. It is also advisable to carry a bottle of water, because the walk can be tiring. There are stone tables scattered along the road, where you can rest or to eat something. If you stay several days, bring a pesticide against mosquitoes.

If you are not interested in walking up and down the hills, a visit to the sanctuary for monkeys and turtles is a good alternative.
The best time to visit the park is during the dry season, from November to February. 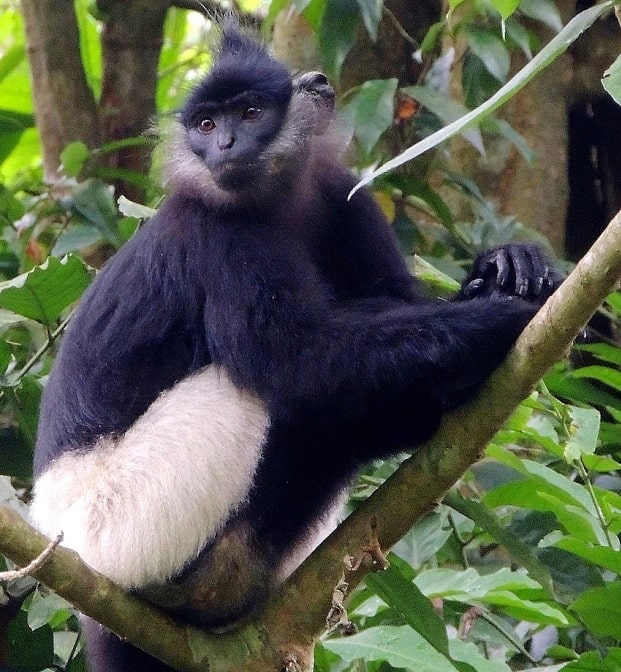 "The primate centre was interesting. They are doing a lot of good work with rescuing endangered species, with several gibbons, langhurs and slow loris there (but the slow loris is nocturnal, so you can't see them unless there is an evening tour available). The guide (30,000 dong per person and it it required) does rush you through it, though. There is also a turtle rescue centre nearby that you can also visit (free). Just past that is the Pangolin Rescue Centre. They have a visitor centre."