"In the evening I take the night train from the big city of Hanoi to Lao Cai. On the night train, I had a berth in a compartment of four. Traveling is quite comfortable. When I wake up I am almost in Lao Cai. My private driver is already waiting for me, but first there is time for a nice breakfast. It is about four hours drive to the village of Can Cau." 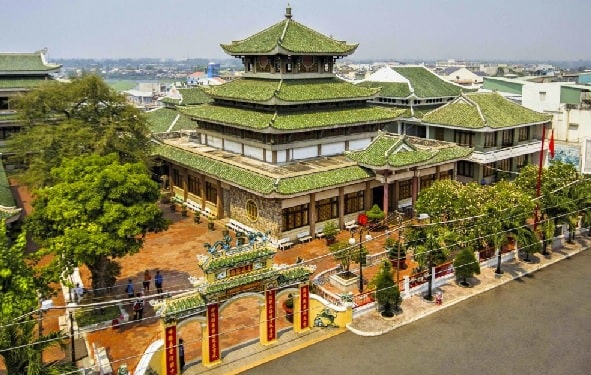 The temple of Ba Chua Xu, - is a guardian goddess. The temple was built in 1820 at the foot of Sam Mountain, west of the city of Chau Doc. Legend has it that in the early 19th century, villagers found a statue of a lady from the 6th century in the forest. In her honor, a temple was built in the hope that she would bring people a better life and abundant harvest.
The temple is built according to the Chinese character "quoc" with four blue tile roofs. Inside the temple is a venerated marble statue of Ba Chua, meaning 'land lady'. Worshipers touch her image and ask for her protection and blessing. Every year, a great festival is held from 23 to 27 of the fourth lunar month, with the 25th day being the most important. 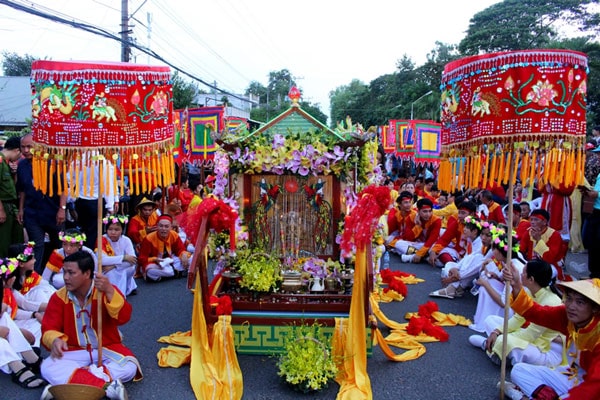 Bathing the Ba Chua Xu statue
The ritual begins at midnight on the 24th when the statue of Ba Chua Xu is cleaned with herbal water. The older women in the village also put on new clothes for Ba Chua Xu. The old cloak is cut into small pieces and then delivered to festival goers and these pieces are considered lucky charms. This ritual normally lasts about an hour.

Thoai Ngoc Hau parade
The ritual begins at 3 p.m. on the same day with bathing the Ba Chua Xu statue. People of the village committee are in traditional outfits and start the ceremony at Thoai Ngoc Hau Mausoleum and have the sacred plaques of Thoai Ngoc Hau, Lady Truong Thi Miet and Village Committee parade to the temple of Ba Chua Xu. This ritual demonstrates the gratitude of the locals to Thoai Ngoc Hau, who had played an important role in the history of the region.

Tuc Toch ritual The ritual begins at midnight of 25 th and continues into the early morning of the following day. Members of the village committee in formal outfit stand in two rows in front of the statue of Ba Chua Xu. There is a white pig roasted whole, a plate of pig's blood with some bristles, a tray of sticky rice, a tray of fruit, a tray of areca and betel, and a dish of rice and salt. The master of the ritual burns the incense on the altar, followed by wine and tea, an invoking speech and the burning of votive papers.

Xay Chau-ritual
The ritual begins after Tuc Yet. To perform this ritual, a drum is placed in front of the altar. The master of the ritual holds two drumsticks in front of his eyes and starts to pray. He also dips a willow branch in a bowl of water and sprinkles the water around him. To complete the ritual, the master plays the drum and begins to sing. It is time for the performance of "hat boi" (a kind of classical opera).

Chanh Te Ritual
The ritual takes place at four in the morning of the 26th. The whole process is similar to the Tuc Yet ritual. In the afternoon of the 27th, all plaques will be returned to the Thoai Ngoc Hau Mausoleum, marking the end of the Ba Chua Xu Festival.

During the festival, the area around the sanctuary comes alive with markets and entertainment including "cai luong" (a type of classical opera), beauty queen contests, slideshows, magical acts, a house of horrors, karate, gambling, restaurants, cafes, bars, and a popular side issue of dancing crossdressers that were banned in the late 1990s. Ba Chua Xu Shrine is the most popular religious site in South Vietnam. 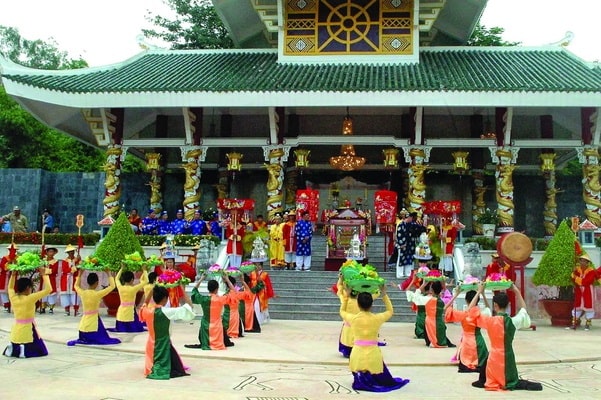