"A stop at a beautiful waterfall where we can swim, is a wonderful moment. We now have considerably suffered from a saddle ass! After a few hours drive through the mountains and dirty roads we arrive in the city of Buon Ma Thuot. we decided to have real Vietnamese food, namely spring Rolls (rice sheets filled with anything: delicious)!
We buy our first souvenirs, namely coffee! How could it be otherwise after a trip where we many have learned about coffee! Buon Ma Thuot is famous for its coffee." 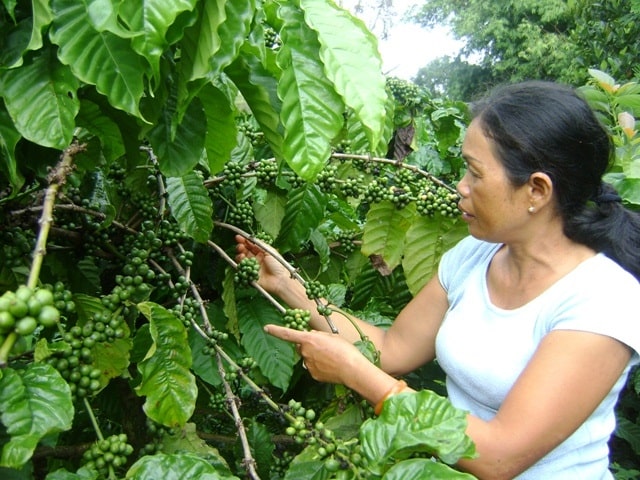 COFFEE, COFFEE, COFFEE! - Buon Ma Thuot, the capital of coffee in Vietnam. The country is after Brazil the second largest exporter of coffee. Because of this you will find on every street corner a cafe, where they sell coffee and most of them are very spectacular. Many offer several kind kinds of burned beans too. The flagship of the coffee are the gardens of Trung Nguyen. This is a huge beautiful garden complete with waterfall and raised mountains, where they grow the coffee. It is very difficult to find a bad cup of coffee in Buon Ma Thuot. The city is a Mecca for coffee lovers, because the city is surrounded by coffee plantations.
Buon Ma Thuot is host to the annual Coffee Festival, which is held in March. Many of the black nectar is drunk by the locals and there are held elephant races at nearby Ban Don Village. Many tourists visit those races. 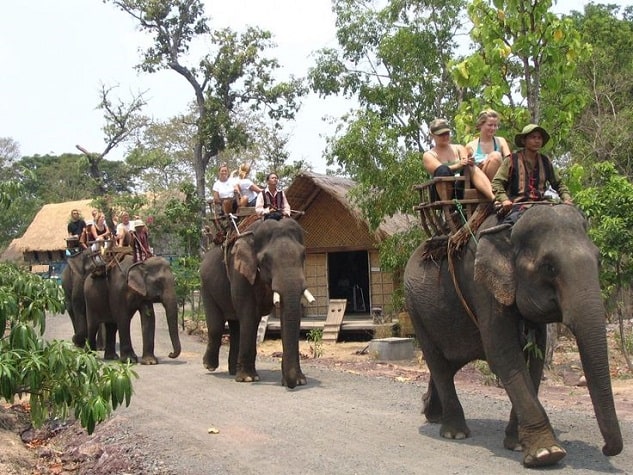 In Ban Don Village you can take a ride on an elephant and that place is situated near the entrance of the Yok Don National Park. Every half hour a (full) bus is leaving from Buon Ma Thout to Ban Don (Buon Don). It is best to get in at the Coop Market, otherwise the bus is already full. The distance to Ban Don Village is 40 kilometres.
The whole village is actually a kind of museum. You can see how it used to be there in the old days. Originally the elephants were tamed and trained by the Ede and the M'Nong, but the village is now an open air museum, where you can ride on an elephant.
The houses in the village are long and are made entirely of wood. The houses are made on stilts. Some are decorated with ornate woodwork. Sometimes the houses reach a length of 100 meters (longhouse). In the beginning, there lived only one family, but as the years passed, more children were born, and they built on a new part of the house. The house was so still a bit longer. At that time there was no plans to go living somewhere else or they did not want the hassle to build a home at a new place.
It was a matriarchal society. Women are the boss and the children get the name of the mother. In order to enter the house, there were two ladders. Little was intended for men; the large one was for the women.

The Yok Don National Park is the largest National Park in Vietnam. The Yok Don Park is flat and is 200 meters high. Between the forest areas are open grass plains. It stretches from the Cambodian border to the Serepok river (at Ban Don Village).
If you come early in the morning, you can see the Ede and other minorities (inter alia the M'Nong) see when they leave their split-bamboo thatched houses to work in the fields. In their backpacks of raffia are their tools. They grow rice, cashews and mangoes. They also keep pigs, chickens and cattle. Furthermore, fishing and especially hunting turtles and lizards.
In the Park live more than sixty species of animals, including tigers, leopards and bears. More than 450 species of birds inhabit the park. Of course they are hidden deep in the jungle. Of all these exotic animals in Yok Don the elephants are the best known. 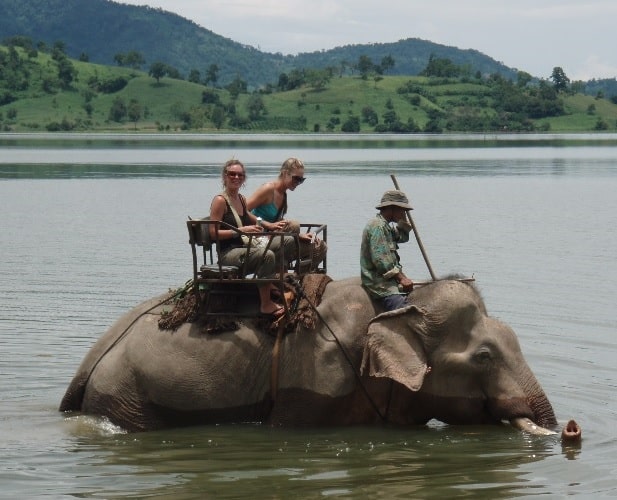 In the Lak Lake

Lak Lake is located 56 kilometres from Buon Ma Thuot in the Central Highlands and it is the largest freshwater lake in Vietnam. The picturesque lake is located on the national road no. 27 which goes from Dalat to Buon Ma Thuot. It is a charming place that is very popular with tourists.
The perfect serene atmosphere and the idyllic glassy water makes that you forget all the worries of daily life. If you row across the lake you see the fish and you can hear it even when the fish catch prey. Sometimes you see elephants with tourists wading through the water. On each elephant are two tourists and one mahout (trainer).
Once there living five thousand people, mostly from the M'Nong community, on the lake. Now they have moved to longhouses ashore.
Today you can go ashore to visit Jun Village of the M'Nong. You will be warmly welcomed into their longhouse of the village, a kind of traditional community house. There you can admire the famous traditional crafts: brocade, benches, drums, gongs and vases. 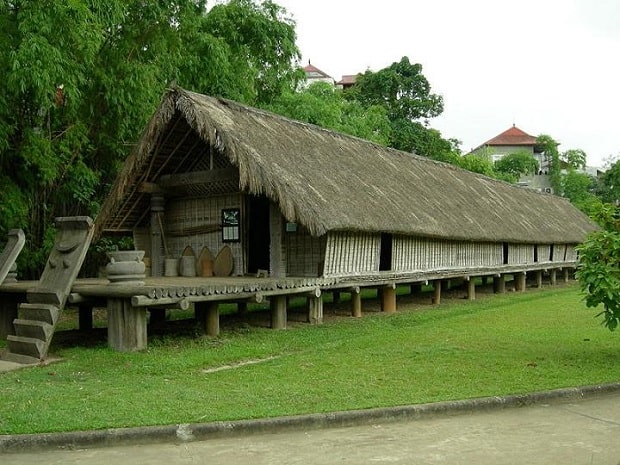