"The day started very sunny and warm. Especially above 35 degrees. Again early breakfast and by bike. First to a beautiful temple (pagoda). Chua Vinh Trang. With a large, white standing, lying and smiling Buddha. The temple dates from 1849 and has endured much.
Then cycled over small, narrow, concrete roads. Along beautiful plants, pomelos, all kinds of palms, and much more. Turn around regularly because the road stops. We also cycled regularly along one of the arms of the Mekong.
On the way eaten delicious vegetarian soup with two ladies. Learned a few words of Vietnamese again .." 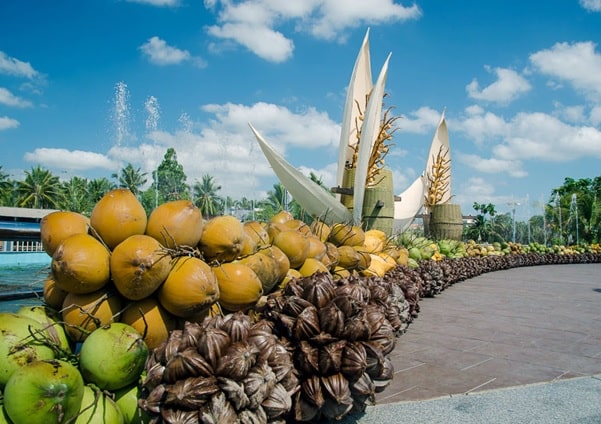 Ben Tre - is the capital of the eponymous province of Ben Tre in southern Vietnam. Although it is only a 20-minute ferry ride from bustling My Tho, tourists are still a scarce commodity, so locals are still open and friendly to tourists.
The surrounding area of Ben Tre has some of the most beautiful landscapes of the Mekong Delta.
The coffee-colored rivers (with milk) make their way along small channels with water palms. Bamboo thatched houses nestle in lush orchards along the river.
The town of Ben Tre is located along the river, so a bicycle or motorbike seems the best way to explore the area, especially if you plan to take it to the orchards on the other side of the river. Bicycles can also be hired everywhere. 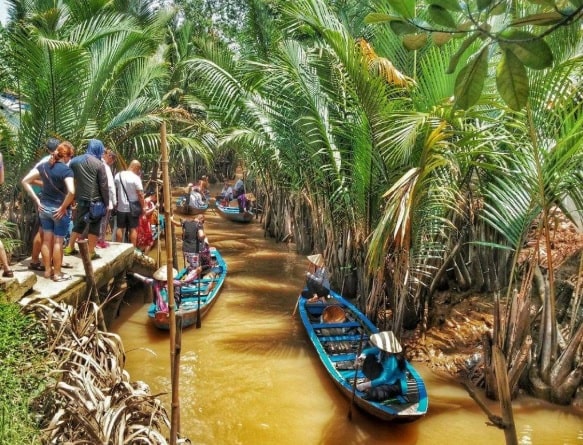 Cycling in the Mekong Delta

It is an opportunity for coconut farmers to meet and share their experiences of growing coconuts. The festival includes about 400 stands with coconut products and other specialties from the Ben Tre province. Dong Khoi Boulevard and Cai Coi Park in Ben Tre City are decorated with miniatures made of coconut. The festival includes a coconut art show, a food festival, a street carnival, miss coconut election, a visit to coconut plantation and a trade fair. Tourists are very welcome. In addition, they have the opportunity to try and taste special coconut products.

Phoenix Island is a small island near Ben Tre. Phoenix Island's other name is “Coconut Monk” Island, because it used to be a place for a monk who only had coconut for food. Today, there is a house on the island to restore the documents and objects of the coconut monk. The landscape of Phoenix Island has many canals, coconut palms and water palms. In fact, Phoenix Island is always included in the tour packages from My Tho or Ben Tre. The short stay on Phoenix Island shows you the examples of how the coconut candies are processed. You will also see many products, which are made on the basis of coconut in the small workshops for sale as a souvenir. 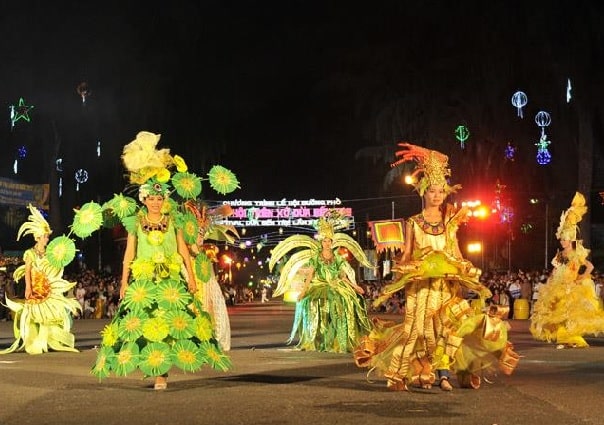 Back in Ben Tre you can take a look at the unspoilt market or visit the rice wine factory on the south bank, 0.5 km west of the old bridge. You can also visit the inevitable coconut candy factory here. It is a must, if you have not already been there, because in this "factory" everything is done by hand. There are four coconut candy factories in the city. The coconut candy store (keo dua) is usually located in the front and the factory in the back. A visit to the factory, where you can see the women making the handmade candies, is free. To enjoy!