a hill tribe in the Central Highlands 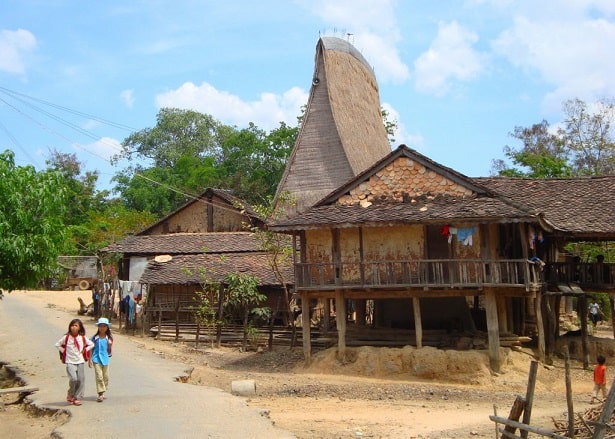 A village of the Bahnar

The Bahnar - live in large areas of Gia Lai and Kon Tum in the Tay Nguyen (Central Highlands). They mostly live in stilt houses, which are characterized by having the entrance door at the front of the house. The roofs are decorated with horns at either end. There is a communal house (the rong), identified from other dwellings by its magnificent high roof. The communal house is a place where public activities are held, including education for the youth, ceremonies, trials, etc.

Monogamy is a basic principle of Bahnar marriage. The exchange of living places by the newly-married couples is increasingly popular. After a period of time, when the husband lives at his wife’s house, and vice versa, the couple then moves to a new place to settle and becomes a new cell of the community.
Education for youths takes place at the communal house, taught by the village elders. This traditional education includes job training, marital arts, combat techniques, and the values of the community.
The primary means of transport of transporting things is the "gui" (bamboo or rattan backpacks). The gui has many sizes and types and can be woven differently, but usually follow traditional motifs. 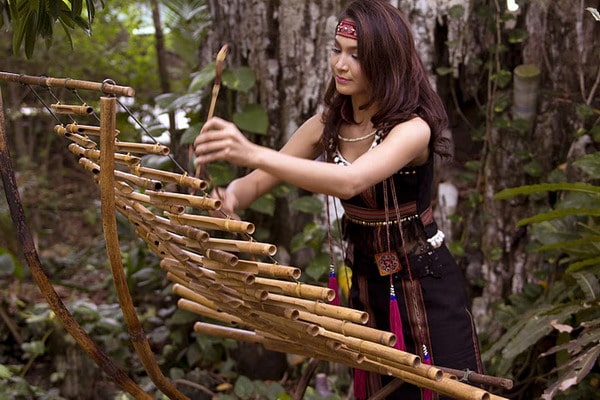 T'rung is one of the most popular musical instruments closely linked to the spiritual life of the Bahnar.

The Bahnar make in agricultural use of "swidden fields" and "slash-and-burn". Slash-and-burn agriculture, or fire–fallow cultivation, is a farming method that involves the cutting and burning of plants in a forest or woodland to create a field called a swidden. (Preparing fields by deforestation is called assarting.) In subsistence agriculture, slash-and-burn typically uses little technology. It is often applied in shifting cultivation agriculture and in transhumance livestock herding.
The hoe is main food used in agricultural production. Intensive land cultivation of swidden fields using the slash-and-burn method dispenses with the notion of allowing fields to go fallow after a period of time.
In general, swidden fields are located near rivers and stream and have long been popular among the Bahnar. But since the beginning of the 20th century, wet rice cultivation using harrows is also practiced. Horticulture and diversified crops also appeared quite along time ago. Animal husbandry and craft production, such as basketry, cloth weaving, pottery and blacksmithing, are less developed.
However they are well-known for their animal husbandry and horticulture, growing maize, sweet potato or millet, together with indigo, hemp or tobacco as cash crops.

They are animists and worship trees such as the banyan and ficus. The Bahnar keep their own traditional calendar, which calls for 10 months of cultivation, the remaining two months set aside for social and personal duties such as marriage, weaving, buying and selling of food and wares, ceremonies and festivals. Traditionally, when babies reached one month of age, a ceremony was held in which, after their ears were blown into, the ear lobes were pierced, thus making the child officially a member of the village. Those who died without such holes were believed to be taken to a land of monkeys by a black-eared goddess called Duydai.

The Bahnar make like the Jarai funeral homes when someone is deceased. They're not as nice as the Jarai, but are decorated with carvings, although they are not as impressive. Some time after the funeral, the wooden statues, gongs, wine jars and other objects owned by the deceased placed in the funeral home. 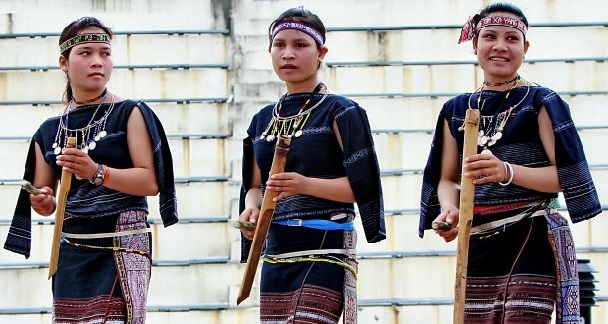